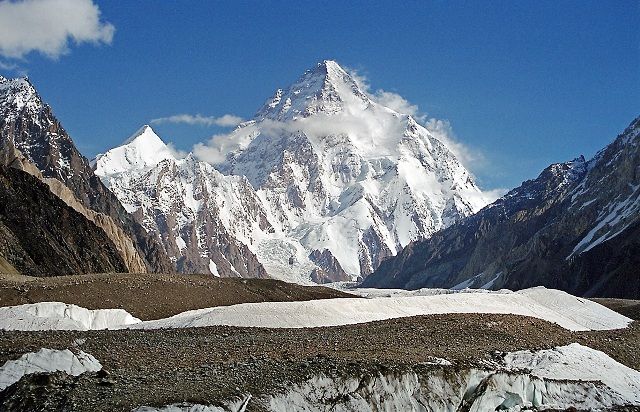 In Turkish language Karakoram means “black” this excellent and impressive set of dark brown and black variety of rocks in very rare mountain range. It houses the largest collection of very high pinnacles and mountains in the world stretched for 400 kms. This concentration has 250 kms depth. It is surrounded by Shyok River in the East and Karamber, Ishkuman and Gilgit Rivers in the West. Then it is surrounded by the Shaksgan River in the North East and by Shyok and the Indus Rivers in the South West. Karakoram has special significance for its fractured rocks, guarding vertical characteristics and very sharp angled slopes offering great challenge to mountaineers and adventure lovers. Four summits above 8000 meters i.e., K-2, Gasherbrum I and II as well as Broad Peak exist in Karakoram in an area of only 20 kms encircling the reputed glacial junction – Concordia. Baltoro, Soltoro, Lupghar, Khunjerab, Panmah, Aghil, Masherbrum, Saser, Hispar, Siachin, Rino, Batura, Rakaposhi/Bagrot and Haramosh are the sub-regions of the Karakoram. 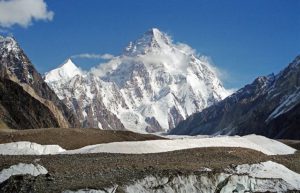 This region has variable snow line ranging between 4200 to 4500 meters during the summer season. The temperatures in the area are extremely varied with large difference between lowest and highest mercury in a day. There is no penetration of Monsoons in this area. From May till end of September, each year is the most viable season to go for climbing in Karakoram. However climbing during winter is possible. Apart from towering mountains, Karakoram house largest glaciers outside the Polar Regions.

Travelers used to be attracted by the elegance and massif of the Karakoram and Hindukush. The Chinese are known to be the pioneers among travelers on the renowned Silk Route passing through these beautiful ranges. They recorded their experience of dark mountains, rope bridges and huge glaciers. Mr. Fattien while traveling from Sinkiang to the South Asian Sub-continent in 390 AD croissed the Karakoram via Mintika Pass (4710 m). Hinen Isang did track his way via Karakoram to this region in 603 AD.

Marco Polo’s travel from Venice to Kublai Khan’s Court in 13th Century left its effects like Marco Polo sheep. Then Ibne Batuta of Tangiers made a journey to this place in 14th century. Afterwards several European dignitaries paid visits to Karakoram seeking adventure, exploration, scientific researches and mountaineering in the late nineteenth and early twentieth century.
Yet in the beginning of 19th century, men of exploration like Mr. J. Henderson and Mr. G.T. Vinge came to Skardu in 1834 and 1836. Hence mountain climbing and trekking in Karakoram commenced in 1892 because Martin Conway during his survey of the Upper Indus, tried to climb summits in the area including Rakaposhi. He was back to the region in 1902 and tried to scale K-2. The grand Duke of Abruzzi from Italy headed his large expedition to go for climbing and have a thorough survey of the Upper Baltoro region in 1909. That showed the way to a series of expeditions eager to do exploration and mountaineering in Karakoram region.

By 1947, some European mountaineers and explorers consisting of British, Italians and American had paid visits to the region. In post independent days in 1947, number of expeditions to this area recorded an increase. In 1953 a US expedition took the initiative of an attempt on K-2 but remained unsuccessful.

In 1954 an Italian expedition led by Prof. Ardito Desio successfully went for the first ascent of the extremely fierce mountain – K-2. Mr. Lino Lecedelli and Archille companions were the pioneers to get to the K-2 peak, scaling via Abruzzi ridge. The area was opened for general mountaineering and trekking in 1974 and since then a sufficient number of expeditions come to Karakoram every year. To date so many mountaineers hailing from various countries have scaled K-2. They are among world famous and prominent mountaineers such as Reinhold Messener etc. Number of expeditions approaching Karakoram every year average to 100. A sufficient number of foreign as well as Pakistani mountaineers have so far scaled other high peaks of Karakoram Range, still there are so many other towering peaks yet remain unscaled looking for a challenge from the daring ones.

The Hindukush stand high in the west of Pamirs. Considerably it stretches from Wakhjir pass at the conjunction of pamirs and Karakoram to Khawak pass in the north of Kabul. First part of it goes beyond Wakhjir pass up to Dorah pass (320 kms long) and separates Hunza from Wakhan. Its second is satuated on the other side of Dorah pass in Afghanistan. The third region with 240 kms length is located in Pakistan stretching into swat and Kohistan. Eastward, the Indus River separates it from Karakoram. Thich Mir (7492m), Darban Zom (7219m) and Shingeik Zom are the other peaks of the area. 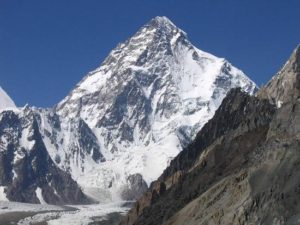 There are few glaciers in the range but these less significant. Because of geographic qualities this area has accessibility to Afghanistan and in 1830 it was first discovered by Europeans and then by the survey teams from Britain. British survey teams had attempted to climb Tirchmir and other summits in the area dating back in 1927. However in 1950 a Norwegian expedition comprising of nationals of different countries along with Pakistanis have scaled it. Other summits of the area were scaled afterwards i.e., in the sixties and seventies. Though almost all the peaks in the above 7000m in the Hindukush have already been scaled, still the goes on to attract mountaineers and those having love for nature. Lately other activities related to adventure tourism such as trekking and jeep safaris have shown considerable rise in the area. 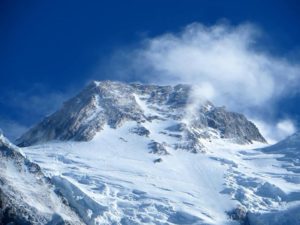 The western Himalayas is located between valley of Kashmir in the east to Indus River in the north and west and Nanga Parbat massif is dominating it. Highest peak of this chain stands at 8125m. the range includes Kashmir, Kaghan, Kohistan, Deosai and Chitral regions. Deosai plains existing at an altitude of about 4500m also dominate this range. These plains are full of flowers blossoming in the summer months, offering very charming scenery. The monsoon also blesses the area and summer is the climbing season. Recently to some extent winter climbing has also commenced.

The Baltoro Glacier, at 62 kilometers long, is one of the longest glaciers outside the Polar Regions. It is located in Baltistan, in the Gilgit-Baltistan region of Pakistan, and runs through part of the Karakoram mountain range. The Baltoro Muztagh lies to the north and east of the glacier, while the Masherbrum Mountains lie to the south. At 8,611 m (28,251 ft), K2 is the highest mountain in the region, and three others within 20 km top 8,000 m. 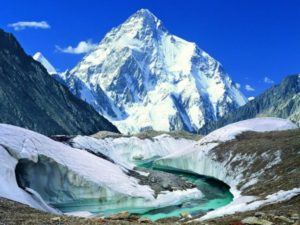 The trough of this glacier is very wide. Small valley glaciers form icefalls where they meet the trunk glacier. The sidewalls vary from very steep to precipitous. The glacier has carved striations on the surrounding country rocks. Moving ice has formed depressions, which serve as basins for numerous glacial lakes.

The Biafo Glacier is a 63 km long glacier in the Karakoram Mountains of the Gilgit-Baltistan, Pakistan which meets the 49 km long Hispar Glacier at an altitude of 5,128 m (16,824 feet) at Hispar La(Pass) to create the world’s longest glacial system outside the polar regions. This highway of ice connects two ancient mountain kingdoms, Nagar (immediately south of Hunza) in the west with Baltistan in the east. The traverse uses 51 of the Biafo Glacier’s 63 km and all of the Hispar Glacier to form a 100 km glacial route. 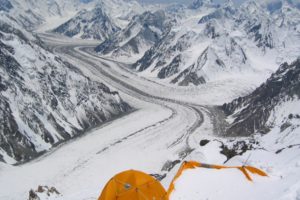 The Biafo Glacier presents a trekker with several days of very strenuous, often hectic boulder hopping, with spectacular views throughout and Snow Lake near the high point. Snow Lake, consisting of parts of the upper Biafo Glacier and its tributary glacier Sim Gang, is one of the world’s largest basins of snow or ice in the world outside of the polar regions, up to 1,600 m (one mile) in depth.

The Biafo Glacier is the world’s third longest glacier outside of the polar regions, second only to the 70 km Siachen Glacier disputed between Pakistan and India and Tajikistan’s 77 km long Fedchenko Glacier.

Campsites along the Biafo are located off of the glacier, adjacent to the lateral moraines and steep mountainsides. The first three (heading up from the last village before the glacier, the thousand-year-old Askole village) are beautiful sites with flowing water nearby. Mango and Namla, the first two campsites, are often covered in flowers and Namla has an amazing waterfall very near the camping area. Baintha, the third camp site, is often used as a rest day. A large green meadow, it has a few running streams near the camp and many places to spend the day rock climbing or rappelling.

Evidence of wildlife can be seen throughout the trek. The Ibex and the Markhor Mountain Goat can be found and the area is famous for brown bears and snow leopards, although sightings are rare.

Batura Glacier (57km long) is one of the largest and longest glaciers outside the polar regions.[1] It lies in the Gojal region of the Gilgit-Baltistan of Pakistan, just north of Batura (7,795 m) and Passu(7,500 m) massifs.

It flows west to east. The lower portions can be described as a grey sea of rocks and gravelly moraine, bordered by a few summer villages and pastures with herds of sheep, goats, cows and yaks and where roses and juniper trees are common