HomeNewsNewsRed Centre: Where the rocks blush

Red Centre: Where the rocks blush 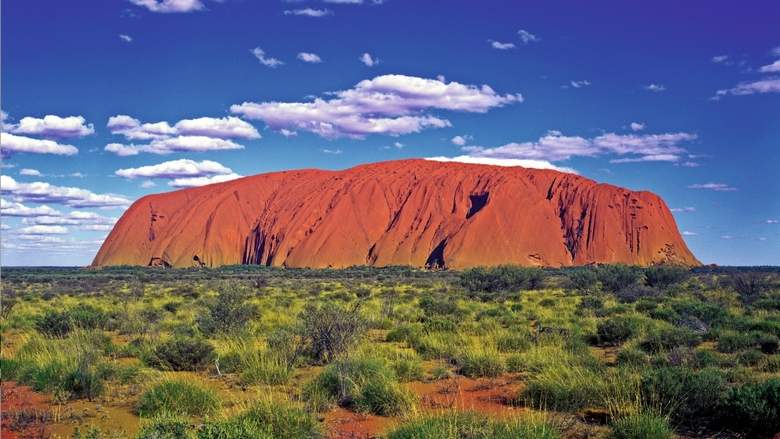 The Red Centre in Australia is a sprawling, craggy landscape that flaunts different shades of the rosy hue

When looking at the terrain below from the aircraft window, while flying over central Australia, I realise the power of Mother Nature: as far as my eyes stretch, I see nothing but a generous spread of reddish tint, erratically sprinkled with tiny patches of green. It’s one of the magical wonders of Down Under, and home to many iconic landmarks – totally different from the rest of the nation.

Commonly referred to as ‘Red Centre’, the region is an extraordinary territory of desert plains, weathered mountain ranges, rocky gorges and outcrops, some of which are indigenous Australians’ most sacred sites. It certainly lives up to its ‘Red’ reputation, with vast amounts of red-coloured earth and countless geological outbursts.

The tourist cliché of Red Centre is primarily driven by a reddish-coloured sandstone rock, a very special one when its geographical statistics and cultural significance are taken into account. Called Uluru, it’s the largest monolith in the world. For the numerically minded, it stands 348 m above ground, covering an area of 3.3 sq km, with a border of 9.4 km around the base. And, more interestingly, this rock extends down further to an unknown depth below the barren surrounds.

Legend says it has existed for as long as 40,000 years, protecting the ancestral spirits of the local Anangu indigenous people. So it’s very sacred to them, spiritually and culturally. However, like many other natural wonders of the world, this was also hidden from the rest of the world until European explorer William Gosse discovered it in 1873. He named it Ayers Rock, after Sir Henry Ayers – an eminent bureaucrat of the ruling British colonisers at the time. However, in 1995, the Australian government renamed it Uluru, as called by the Anangu people.

When I seize a top-view of the rock from the aircraft – and later, a distant-view from an elevated sand dune near Ayers Rock Resort (which offers a variety of accommodation options to suit every budget) – its surface appears to be smooth and unscratched. Magic unfolds, when you get near. I’m amazed to see the entire body absolutely uneven with curvy contours of different shapes and sizes, marked with corrugation and scars, and some pierced with holes, caves, crevices and ridges.

A good understanding of these geological masterstrokes is best grasped when circumnavigating the rock, which can be done by walking or bike riding the trail at its base. Another option is to go around on a Segway with a guide who passes on interesting indigenous stories connected with these geological break-ups. The tales of Liru, the poisonous snake, Kuniya, the woman python, and Mala, the Rufous hare-wallaby impress me the most. They inspire me to learn more about the indigenous people and their lifestyle and culture. Many opportunities are available for that -from a visit to the Uluru Culture Centre and taking part in many in-house indigenous activities at the Ayers Rock Resort to opting for a true Aboriginal experience tour offered by SEIT, a small group touring specialist.

The strongest lure of Uluru for its thousands of visitors is its extraordinary change of colours at different hours of the day, most striking being at sunrise and sunset. It’s a dreamlike experience to enjoy the tranquillity of the land at pre-dawn time under the canopy of stars before watching the first rays of the sun illuminating the greyish surface of the rock. The awe escalates if trekking down the desert on a camel, like an Arab Bedouin. As the sun moves from east to west, the colours on the rock keep transforming from different varieties of red, oxblood, scarlet, dull burnt ochre to even purple at times. Much also depends on the viewer’s imagination; that’s why many visitors fail to give a precise description of the shade of the rock.

The ambience is obviously tranquil at dawn, but at dusk, it turns into party mode when loads of tourists gather at vantage points to bid goodbye to the sinking sun. The fun continues when some join an exclusive dinner arrangement under the sparkling outback sky called ‘Sounds of Silence’.

An added attraction in Uluru today is ‘Field of Light’, a lighting exhibition, which, since it opened in April 2016, has emerged the biggest crowd-puller. Designed by internationally acclaimed British artist Bruce Munro, this solar-powered installation, comprising of over 50,000 slender stems crowned with radiant frosted-glass spheres like blooming tulips, illuminates the landscape mystically as soon as blackness creeps in.

This exhibition is scheduled to close on 30 March, 2018, but Uluru and its indigenous guardians will remain there with their fairytale powers to sway onlookers.

Uluru is not the only attraction of the Red Centre; there are many other natural marvels to mesmerise visitors. Located 30 km west from Uluru is a series of 36 magnificently-domed conglomerate rocky formations called Kata Tjuta. The tallest dome is over 500 m above the plain. Called Olgas by the natives, the rocks hide a maze of fascinating gorges and crevasses. Here again, the colour of the ochre outcrops changes with the movement of the sun.

Another rocky growth worth mentioning is the 300 m high Mount Connor. Located 100 km east of Uluru, this flat-topped sandstone creation from a distance looks like Uluru and is often mistaken by visitors. Hence, locals have named this ‘Fooluru’. This is best viewed when driving to Kings Canyon, another legendary landmark of the region, located almost 300 km northeast from Uluru.

Often referred to as the uncrowned emperor of canyons, Kings Canyon is a gem of an Aussie destination, surely off the beaten track. Those who have been there feel so intrigued by its soaring sandstone walls that they have no hesitation to stamp it one of the best Aussie sites which provides individuals a private encounter with an ancient land belonging to the local Luritja indigenous people for more than 20,000 years. Trekking the rim of the canyon is the most popular activity there. Views of the red-rock cliffs, palm-filled crevices and the surrounding red desert plain from the top is a feast for the eyes.

However the hike is not easy, so the less energetic have the option of glimpsing the canyon’s beauty from a chopper. the bonus is: being able to spot wild horses and camels wandering through the red desert sands.