A Combine exploration of unique Kalash Culture might Hindukush, the Karakoram & Himalayan One in a lifetime opportunity 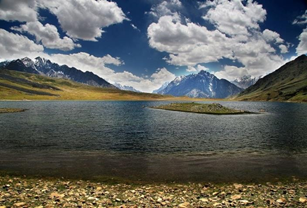 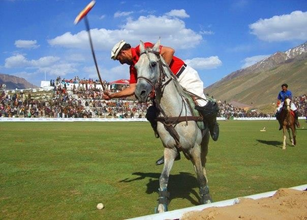 At the top of the world, Shandur festival is an amazing challenging festival for the participants, celebrated by the tribes of Gilgit and Chitral in the northern areas of Pakistan.

This is a centuries-old festival, the tribes from the mountain regions of Gilgit-Baltistan and Chitral meet annually at the fascinating pasture and highest polo ground of the world (12500 feet=3810 meter). A living civilization, prestigious heritage and amazing culture of mountain communities are practiced in a way that attracts and hold attentively by a unique power, personal charm, unusual nature with some special quality; enthral: a vivacity that is fascinating the audience to arouse the interest or curiosity of allure. 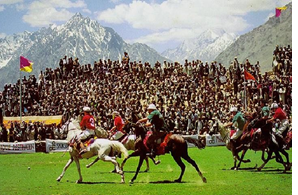 Shandur top in District Upper Chitral is often called the “Roof of the world” is vivacious challenged for every life who are not acclimatized with the high altitude atmosphere – is multiplying the challenges for the sportsmen and the polo horses( evolved over the past 45 to 55 million years from a small multi-toed creature and taxonomic family Equidae) at the world highest polo ground in a unique freestyle polo- the Game of Kings and kings of games- and others sports and culture activities under the open sky adjacent to one  of the largest glacier lake on the top roof of Hindukush range. The polo tournament is featured in the first episode of Himalaya with Michael Palin. Various teams of Gilgit- Baltistan and Chitral have always played the game of polo closest to its original form. In the past, the British Rulers were the patrons of the game. 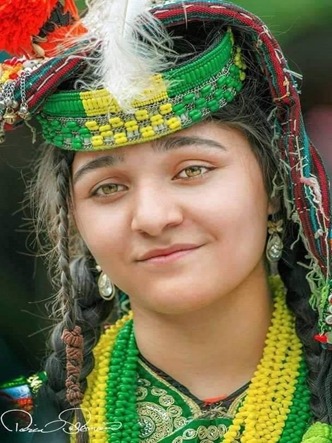 The festival also includes full night folk music, dancing, showcasing craft and arts, culture show performed by a different group of Chitral and Gilgit Baltistan in the camping villages established in the vicinity of the polo ground near the glacier lake. Other attractions of the festival include trout fishing, mountaineering, trekking, hiking, horse riding, paragliding and motorized gliding and a beautiful display of fireworks.

Kalash or Kalasha valleys are a wonderland for tourism: The Kalash are an indigenous people living in District Lower Chitral KP Pakistan. the Kalash hold on to their own religious beliefs, along with  their own identity, way of life, and language. The Kalash people are also noted for their fair skin and blue eyes, leading to a popular hypothesis that they were of Greek origin, specifically the descendants of Alexander the Great’s soldiers who followed him on his campaign in India.

They live in three specific valleys in the south of Chitral- Bumburat, Birir, and Rumbur, an estimated population of about 4000 people, which makes them the smallest minority group of Pakistan.

Kalasha culture is one of the ancient and rich cultures from across the world and might be described as being of universal value, would be something which was extraordinary and unlike anything else in other parts of the world. The Kalasha are a unique people, unlike any other on the globe in cultural practices and way of life, clearly differ from both the surrounding cultures of Pakistan and the rest of the world. Greek volunteers in the valleys said that the ‘’Kalasha are the cultural heroes of 21st century’’. The Kalasha way of life is finely balanced, allowing both men and women to do their duties freely. The Kalasha society is not a male-dominated society like other communities in Pakistan. The Kalash social organization is very effective and ensures there is no cruelty or discrimination based on issues of gender. The Kalasha culture is appreciated globally here one cannot marry with a close relative, including second cousins not within the same  caste.

The Kalash peoples believe in a single, creative God, referred to in the Kalasha language as Dezau- use the Persian term Khudai as well. Kalasha peoples do not have any routine daily prayers, they do pray whenever they initiate any activities like harvesting, ploughing, construction and whenever the favour and honour of DEZAU are needed. Most prayers are offered during Kalasha festivities. There is a strong belief of in purity and impurity in the Kalasha culture. In the Kalasha belief system, women are considered to be especially impure during menstruation and childbirth. There is a separate building for these women and it is prohibited for men to enter the area. The area is known as Bashali. Kalash women have a unique and colourful dress that serves as the most obvious symbol of identity for the Kalash community. They are fun of music and dance and both male and female celebrate the four different events together by dancing and celebrating happiness. It may be not wrong if we say that Kalash is the happiest and innocent people in the world.

ITINERARY FOR THE TRIP

In this venture, we assure you quality time. Chitral travel Bureau is one of the local tour and trekking companies in Pakistan. Combining the natural beautify, culture and heritage together is one the best tour we are offering to our clients/customer and guest. Please do not hesitate to Contact Us or visit Discovery Air Services for more details and tanneries.

Call us or drop a message. Our agents will be in touch shortly.

Call us or drop a message. Our agents will be in touch shortly.